Today my husband Anthony and I brought Mike to his routine Botox appointment at Lutheran Hospital. All was well during the trip into Brooklyn, relaxed, comfortable, sleepy.  Unfortunately Anthony was not able to park so he had to wait in the van while I brought Mike up to the office.  Once in the waiting area, I saw his eyes looking around and I guess he realized where he was. His head shot up and I saw slight agitation.  We were an hour behind schedule so his anticipation of what was ahead was increasing.  We were finally called into the room and he was Not happy. The doctor began setting up and when she came around to face him he gave her one of his "not to nice" looks! She even looked up to me with amusement and responded with "He really does not like me!!" He continued to focus completely on her so she suggested I play some of his favorite music on You-tube.  I did which began to distract him. The shots he receives are given into his hands, forearm and bicep. These as you can imagine, are Very painful but he got thru it.  Afterward, we had enough time to bring him home for a while.  I decided to leave him along to rest.


The highlight of the day was when his father came over to him to tell him when he comes home again tomorrow, he joked with Michael that he was going to put duct tape on me and put me in the closet so I can't bother with my stretching exercises etc. With that Michael picked up his head toward his dad and began to what appears to use as his smiling and laughing!  We have witnessed him do the same thing occasionally when we are watching TV at the appropriate time during a funny scene. We both took all these actions as a Very Good sign.

Michaels progress has been very slow, however, he continues to surprise us and helps us to continue to BELIEVE and NEVER GIVE UP. Hopefully next month we will have another progress story to tell.

Thank you all again for your continued support and prayers.
Posted by Anthony Bartolo Sr. at 9:39 AM No comments: 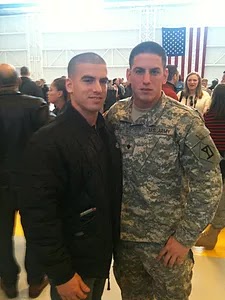